When the owners of a lakefront home in Cornelius wanted a designated play place for their three young daughters, the team at Aguilar Design Studio in Cornelius came to their rescue. Aaron and Laura Aguilar, the spouses and owners behind the Cornelius-based firm, converted an unfinished basement into a playroom. They made sure it had plenty of storage, but they also added fun, custom touches for the girls and their hobbies. “Little girls come with a lot of little things, so this wasn’t just a playroom,” Laura says. “It was really about the storage. It needed to be beautiful for the parents, but functional for the kids.”

With three little girls under age 5, toys found their way into the living room, kitchen, and hallways. “It’s a big house,” Laura says, “but it didn’t have one room where the girls loved to be.” The basement made the most sense for a playroom, but first the Aguilars had to add insulation, heating and air conditioning, and drywall. “It was a long room, so we added a wall and divided it up before we did the built-ins,” Aaron says. For the custom cabinetry, Laura chose a soft shade of blue to pull in the blue tones throughout the rest of the home.

In the center of the cabinet wall beneath the television is a daybed that pulls out and acts as a stage. “They love to sing and have tons of microphones,” Laura says. “One of the girls requested a karaoke stage, so we came up with this idea for something you could push back in when it’s not in use.” Another is an artist, so they created an art corner where she could store her supplies and display her masterpieces. In another corner, they put a big mirror and a place to hang costumes.

Laura added a plush pink rug, cozy chairs, and plenty of baskets to hold their menagerie of stuffed animals. “Everything is soft to the touch, which the girls really love,” she says. “All of the open shelving is great so they can find everything easily.”  Besides the functionality, she says it’s also a space they can grow into. “You can change out the pink when they’re done with pink, get new seating, and change out the rug, but the basic layout of the room will never go out of style,” she says. “It’s a really good hang out space no matter what age the girls are.” 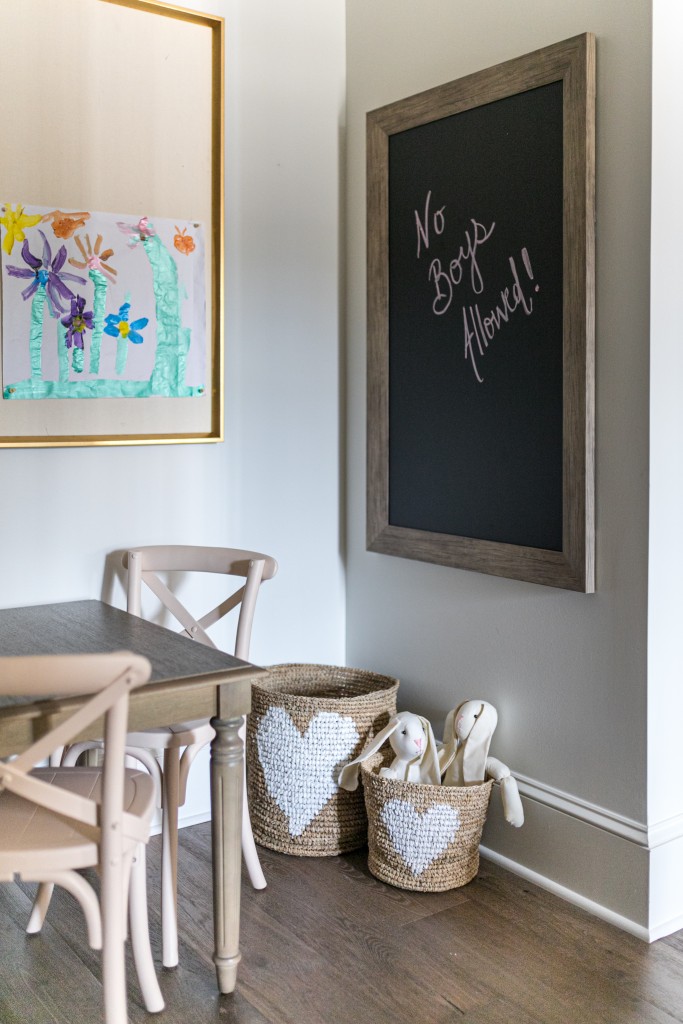 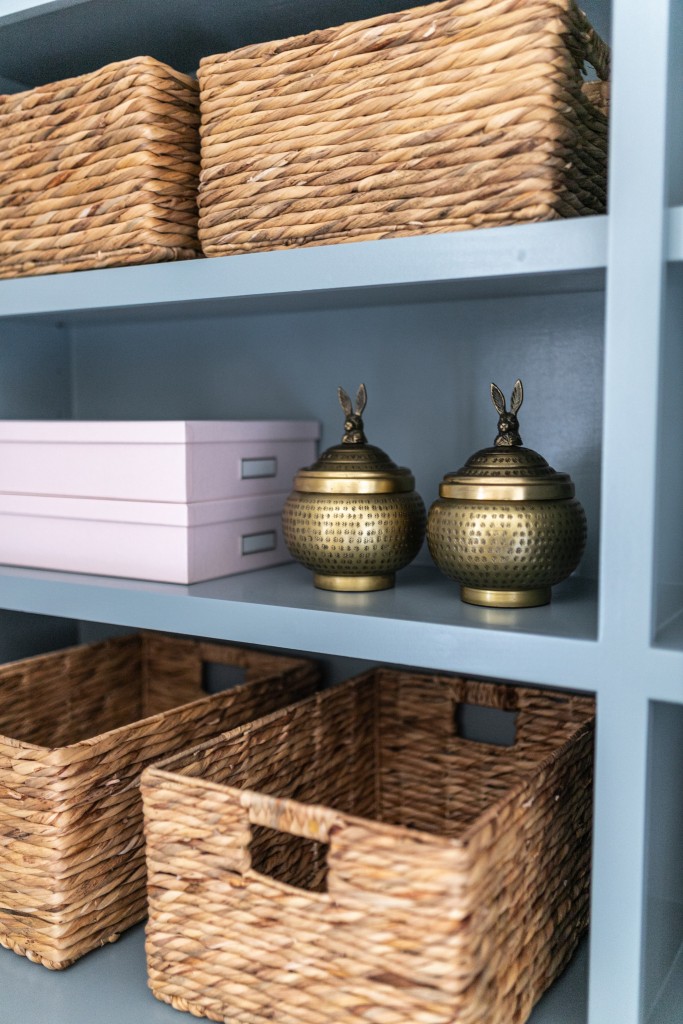 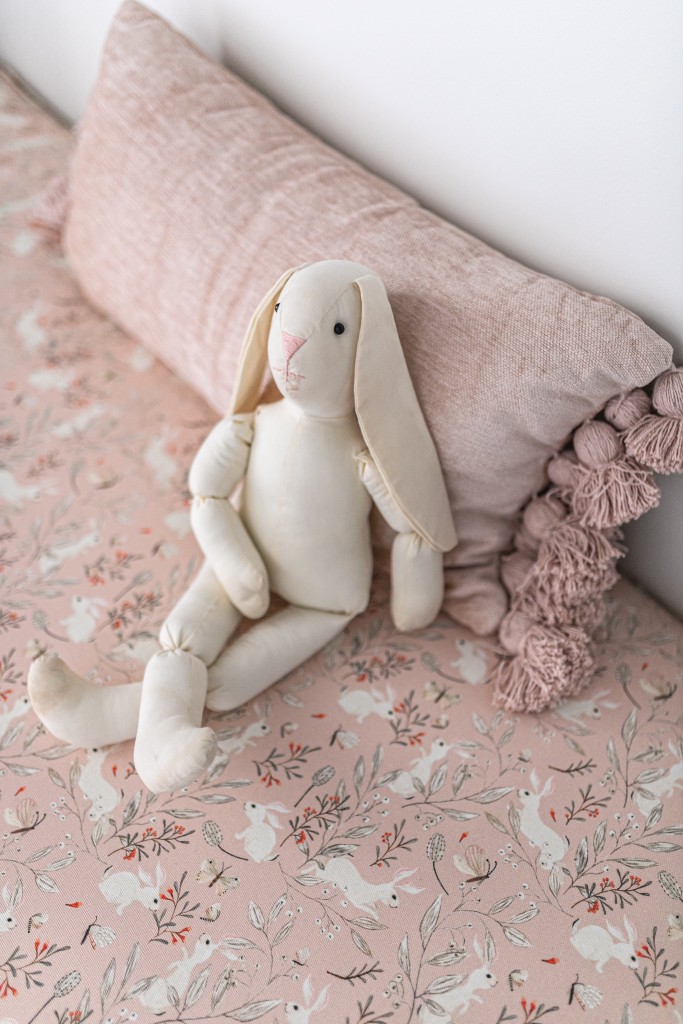 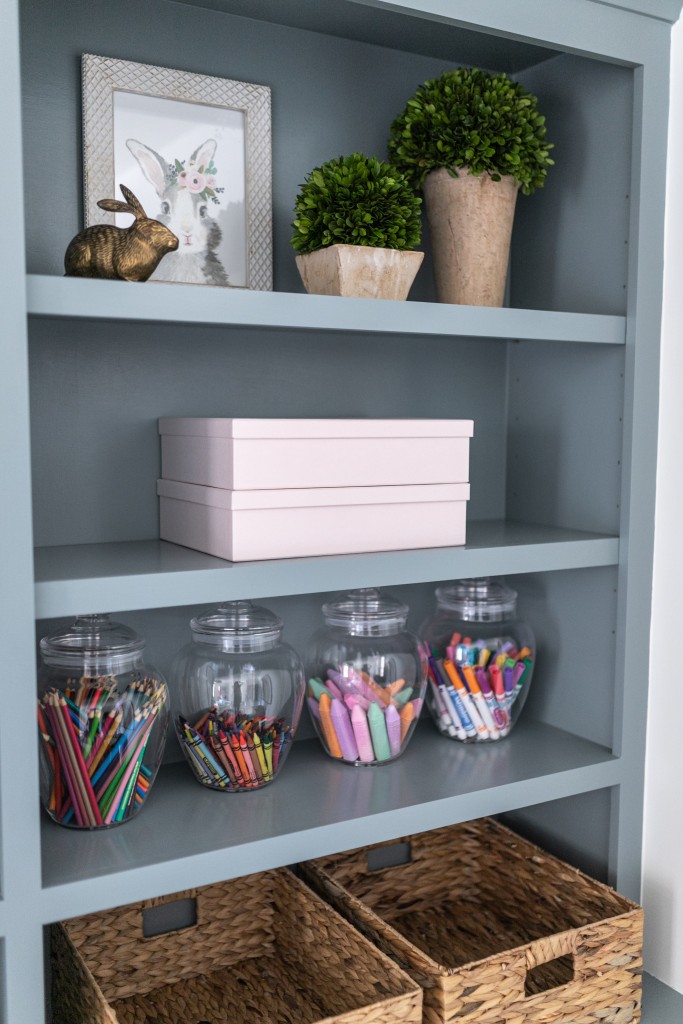 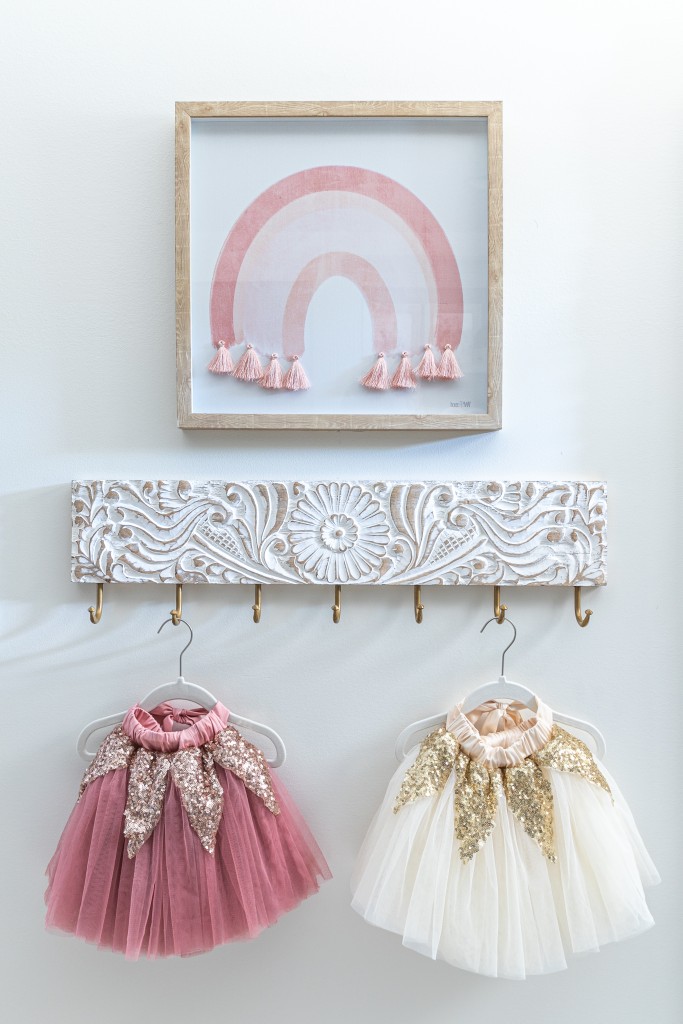 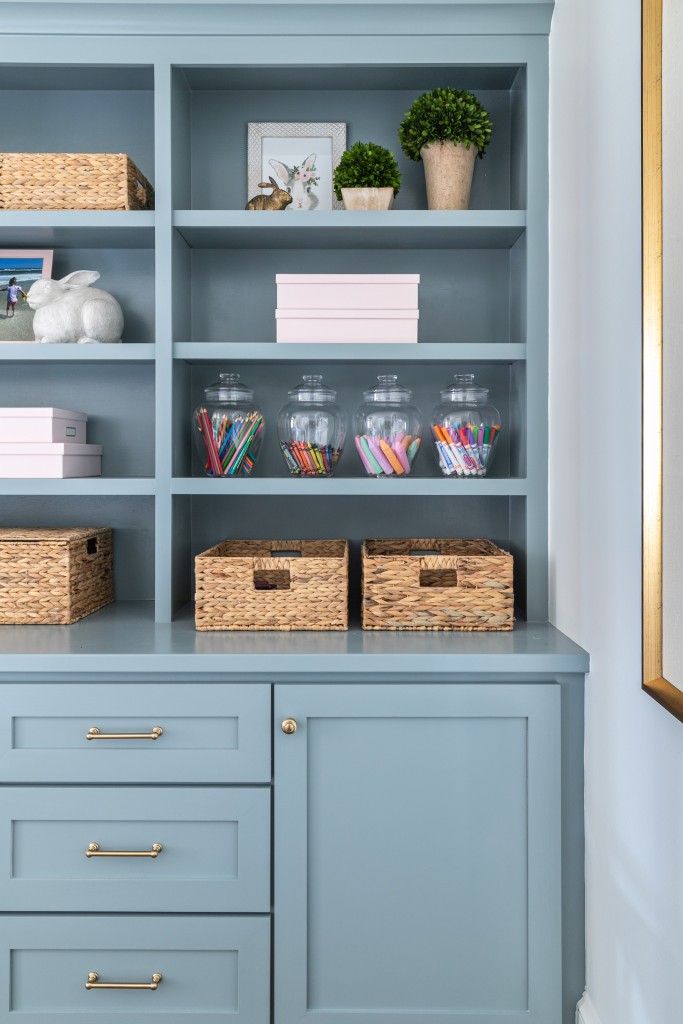 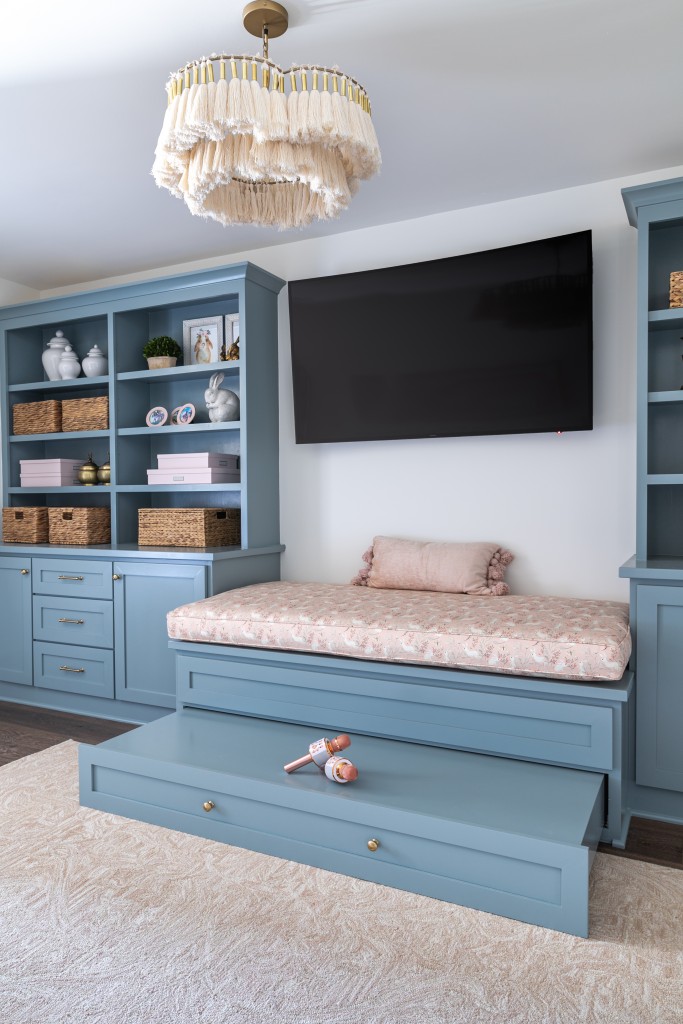 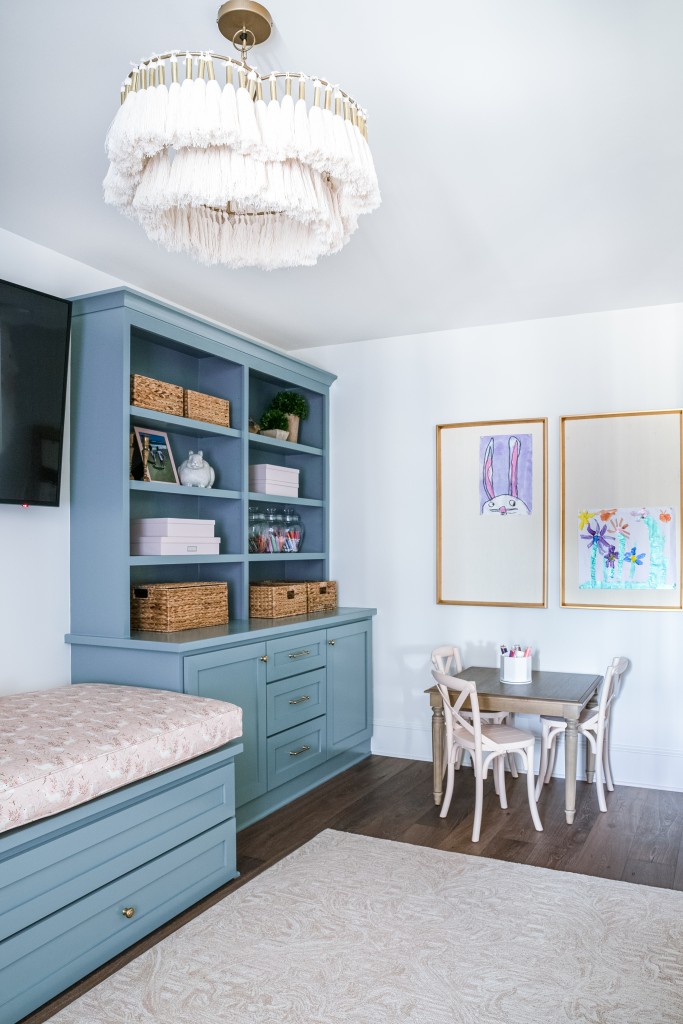 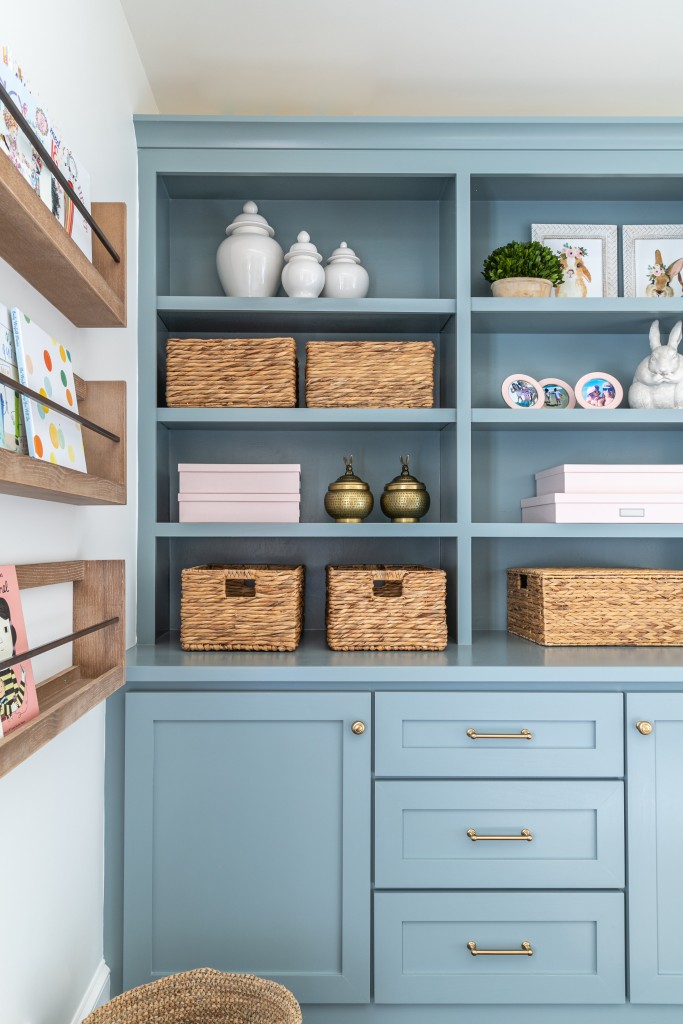 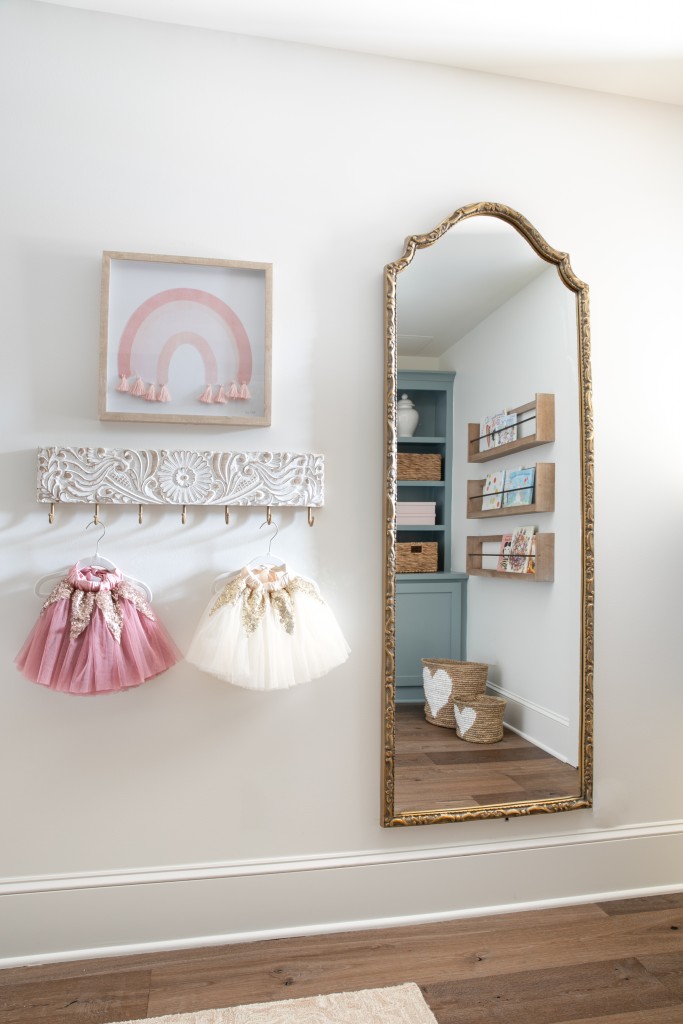