ROOM WE LOVE: In Living Color

Lauren Clement designed nearly every room in her client’s 6,000-square foot home in the The Enclave at Longview, a gated community in Marvin. “Their style is pretty modern, and you don’t get a lot of that in Charlotte,” she says. But for the children’s bedrooms, the homeowners wanted to create fun and functional spaces for their two school-aged kids. Their daughter, an avid reader, wanted a rainbow theme. Their son, a budding engineer, loved camo and wanted plenty of storage for his legos. Despite COVID delays and material shortages, Clement managed to design a pair of fun, functional bedrooms bursting with color.

“Their daughter said, ‘I love rainbows’ and that was that,” Clement says. She used vinyl peel-and-stick rainbow pattern from Spoonflower for the accent wall behind the bed. “I love peel and stick wallpaper,” she says. “It’s the best stuff ever for kids rooms and laundry rooms because it’s removable and damage-free to the walls.” She added a window seat with built-in shelves for a book nook, and painted the drawers in the colors of the rainbow for another pop of color. “I love when you can go into the wall and recess out a little nook in there,” she says. “It’s such a clever use of space.” 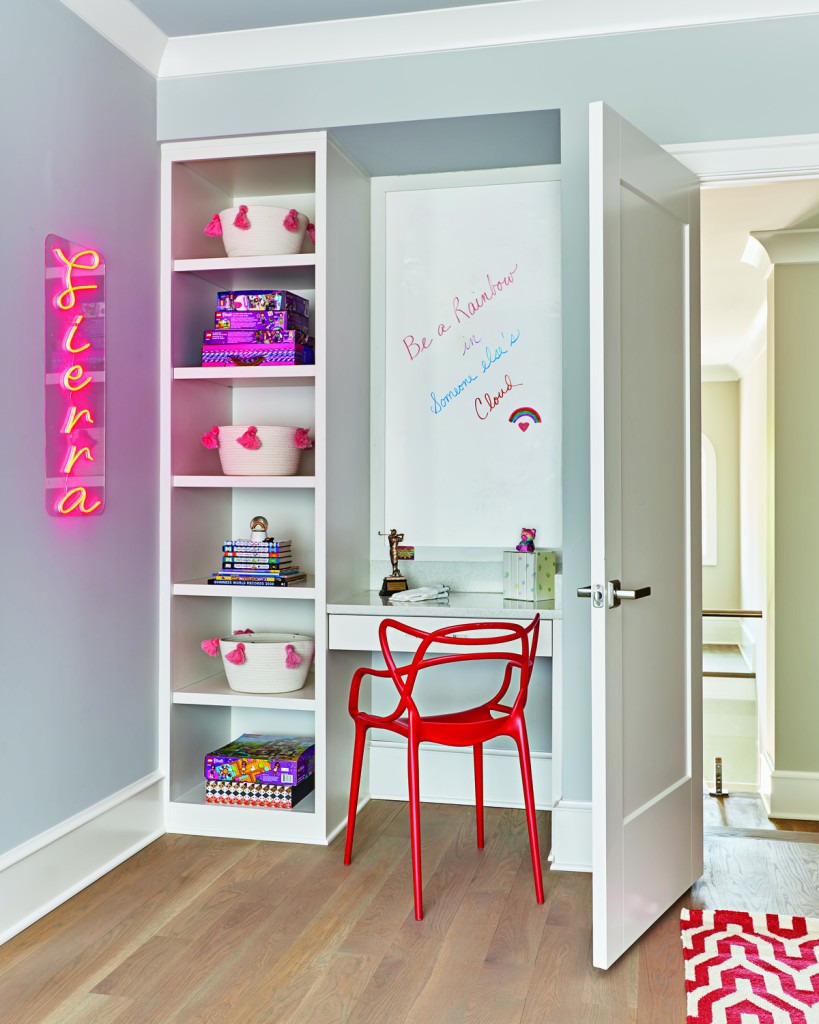 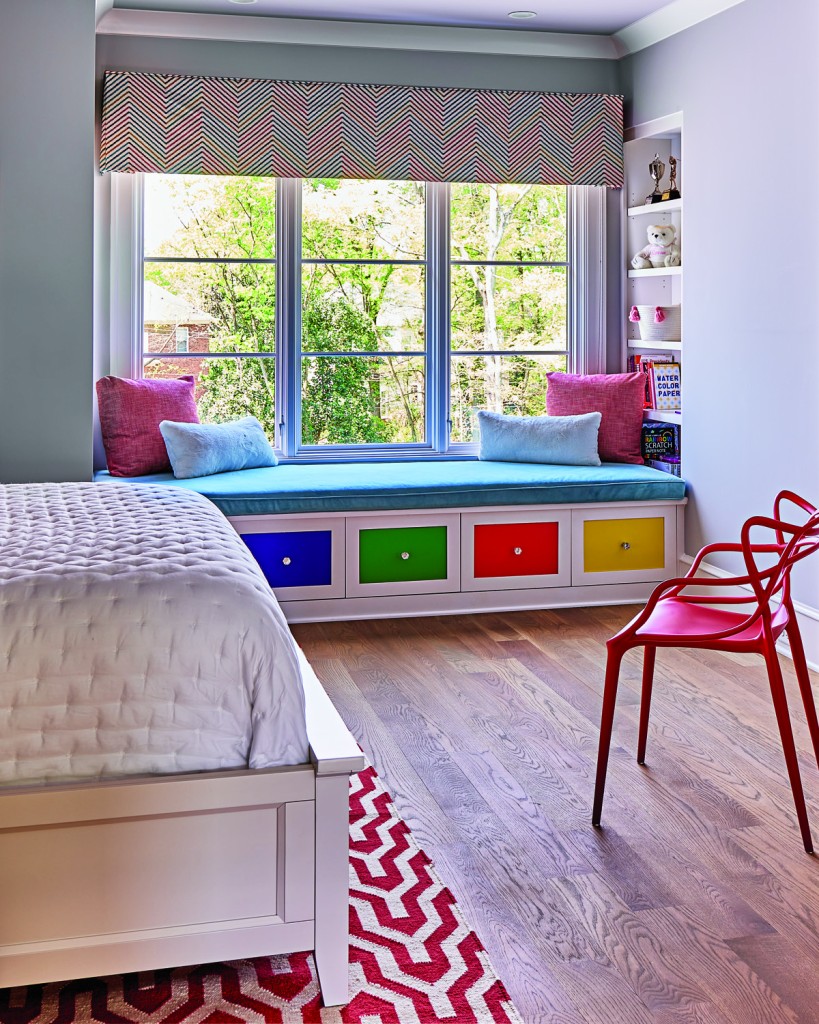 For the boy’s room, Clement used a blue camo pattern from Spoonflower for an accent wall, and installed a blue built-in desk and shelves to hold all of his trinkets. “(Their son) is an engineer kid and has stuff out all the time, so we needed some cool display areas,” she says. His bed and side tables are a natural wood tone that will age with him, and the understated blue and white window valance doesn’t compete with the statement wall. “We gave him lots of storage and space to tuck away his toys and legos so it looked nice and tidy—this room is just smart.” 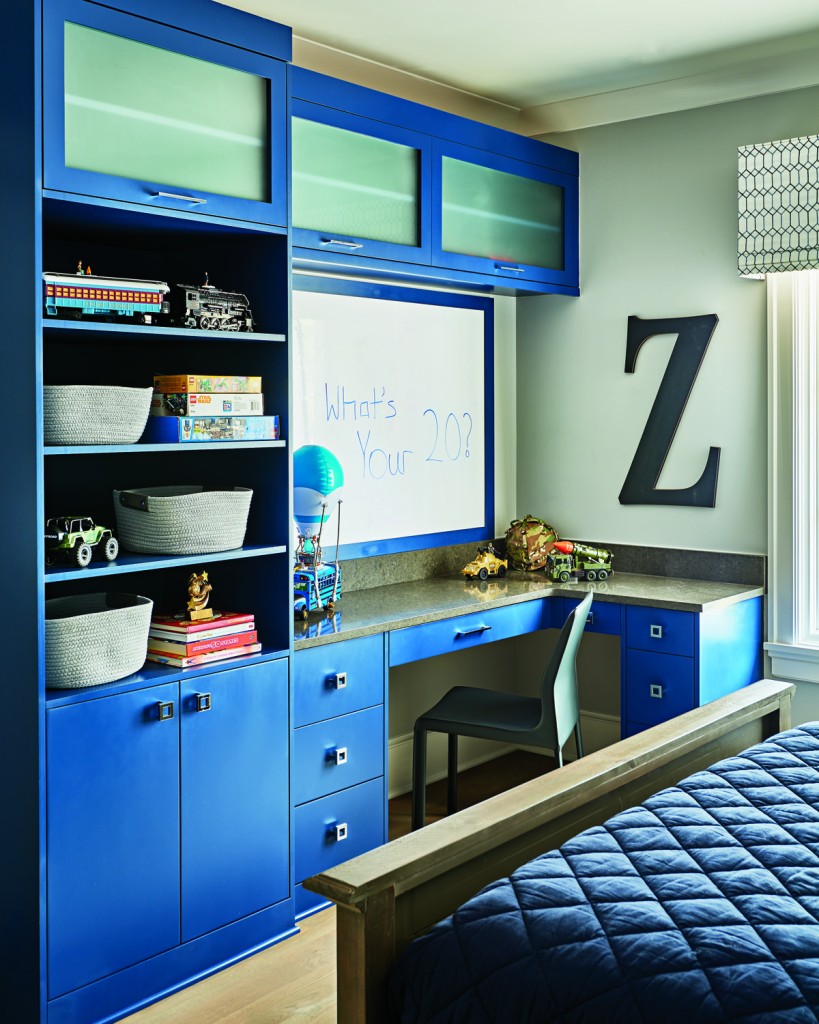 The homeowners were totally onboard when Clement suggested neon lights for both kids, so she worked with a vendor on Etsy to make customized LED signs with the childrens’ names. “I’d seen a designer friend in Texas install one, and she did a tutorial because it’s like hanging a TV on the wall; you don’t want to see the cord,” she says. “I love that these aren’t just typical kids’ rooms. They’re fun and colorful and I love how well their personalities are represented.” 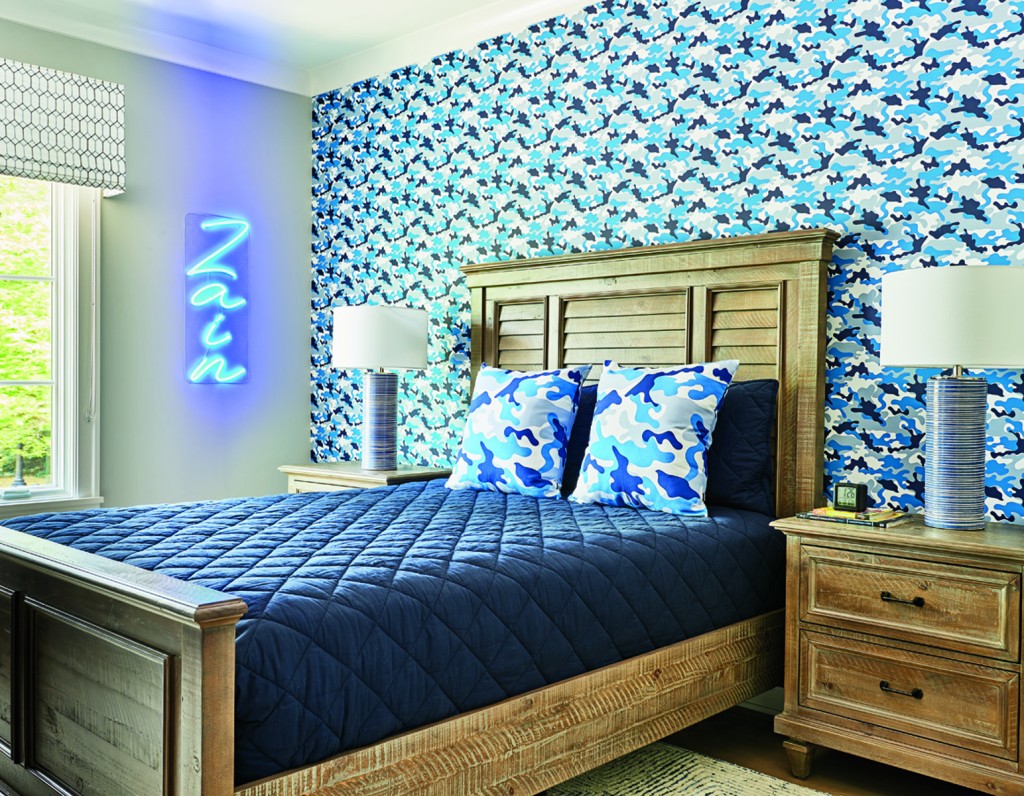