Visit these sites that honor the slain civil rights leader

Dr. Martin Luther King, Jr. was born in Atlanta on January 15, 1929. Inspired by the teachings of Gandhi in seminary school, he later took up the same pulpit as his father and grandfather before him at Ebenezer Baptist Church and ultimately led the Civil Rights Movement. At 35, he became the youngest person ever to receive the Nobel Peace Prize. Honor King’s memory and work through these community events and celebrations.

MLK Weekend Celebration. Kannapolis and Concord feature a weekend full of events that follow the theme “Injustice Anywhere is a Threat to Justice Everywhere: Holding Fast to The Dream.” Watch the MLK Dream Day parade on Jan. 14, attend the Keeper of the Dream awards banquet on Jan. 15, and take part in a march and wreath-laying ceremony on Jan. 16. Full details here. 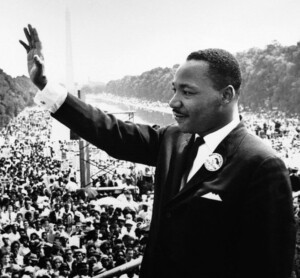 Martin Luther King, Jr. addresses the crowd from the steps of the Lincoln Memorial after his “I Have a Dream” speech in Washington DC in 1963. (©United States Marine Corps)

MLK Day 2023: It Takes a Village. The Gantt and Levine museums come together for a joint celebration supporting the Gantt’s “Men of Change: Power, Triumph. Truth” exhibition. Activities include a children’s story time, a feature film, arts and crafts, MLK trivia, a look at the exhibition and much more. Harvey B. Gantt Center for African American Arts+Culture, 9 a.m.-4 p.m.

MLK Holiday Celebration. Honor King’s legacy at this annual breakfast put on by the YMCA of Greater Charlotte. “Equitable Leadership in Challenging Times” is led by a panel of local leaders and features prayer, music, dancing and spoken-word performance.  Crown Ballroom at Charlotte Convention Center, 8 a.m.

Together We Rise. The Charlotte Symphony explores the themes of freedom, strength and justice through the works of a diverse range of composers. Sandra Levine Theatre, Queens University of Charlotte, 2319 Wellesley Ave., 7:30 p.m.