The Pint-Sized Foodie: An introduction to Big Al’s Pub and Grubberia

The latest from our kid food critic

Each month, our 8-year-old resident foodie visits a different Charlotte-area restaurant that’s kid-friendly—but not a kid-topia. He orders something he’s never tried before and reports back with his recommendations for kids and their parents. Here is his review of Big Al’s Pub and Grubberia:

You can sit at a table or a booth so we picked a booth so I could watch “Spongebob” on one of the TVs on the wall. Then the waitress comes to take your order. Oh! And there’s one of those toy claw machines that you can play on while you wait.

It was like a big snack dinner. The fried pickles were the bomb and the tater tot nachos were gi-normous. Same with my sister’s quesadilla—it was, like, bigger than most grown-up sizes! Also, I got to choose the flavor of my wings so I got them garlic hot.

It took a looooong time to get there and was kind of hard to find. (Ed. Note: Big Al’s is hidden behind the Rite Aid at the corner of Harrisburg and Albemarle Roads.)

Tater nachos. I’ve had tater tots before, and nachos, but not like that all mixed together. They used tater tots instead of chips but had normal nacho stuff on top like cheese and chili.

Hmmmm…maybe the fried pickles? No, wait. The wings. Also, there was lots of cool football and NASCAR stuff on the walls.

If they like to watch sports, there’s, like, 20 billion TVs in there. Mommy said the bills was really cheap, too, and we still had tons of food to take home with is. It looked like we barely even ate the tater nachos!

I want to win a toy out of that claw machine. —T.B. 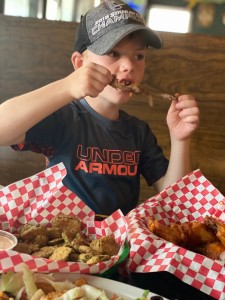 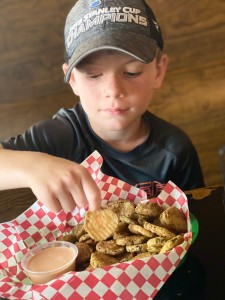