Room We Love: A Girly, Not Gaudy Kids’ Room in Quail Hollow

The team at House of Nomad gives a little girl’s bedroom a playful, global-inspired look

Berkeley Minkhorst and Kelley Lentini, owners of House of Nomad, touched every room in their client’s custom build in Quail Hollow. They warmed up the spacious, modern interior with global-inspired décor, which they brought into the 7-year-old daughter’s bedroom. “It’s not something out of the Disney store or completely disconnected from the rest of the house,” Minkhorst says. “It still has plenty of personality and it’s a space she can grow into.”—Taylor Bowler

The homeowner requested twin beds, but left Minkhorst and Lentini to design the rest of the bedroom. “We knew the little girl really liked bunnies and she has a girly side, so we pulled in some pinks without going too far in one direction with one color,” Minkhorst says. They also worked with the overall theme of home, which has lots of wood and textural elements, adding mudcloth pillows and a plant from Malone’s Nursery.

Minkhorst and Lentini, who source many of their fabrics and home accents from around the globe, used vintage Moroccan rugs to upholster the two pillows. “The pink blankets and mudcloth pillows were hand-sourced from Morocco, and the mirror above dresser is a piece we designed in Bali,” Minkhorst says. They also put custom upholstered ottomans at the end of the beds for extra storage.

The room’s statement piece is the wallpaper, which features a bunny pattern by artist Hunt Slonem. Instead of filling the entire wall, they framed it out in molding and positioned the beds and side tables inside the framing. “The black and white gives it some sophistication, and with kids’ rooms, we want to create something that can last,” Minkhorst says. “It’s playful and sweet for that age group, but she can always make simple updates later.” 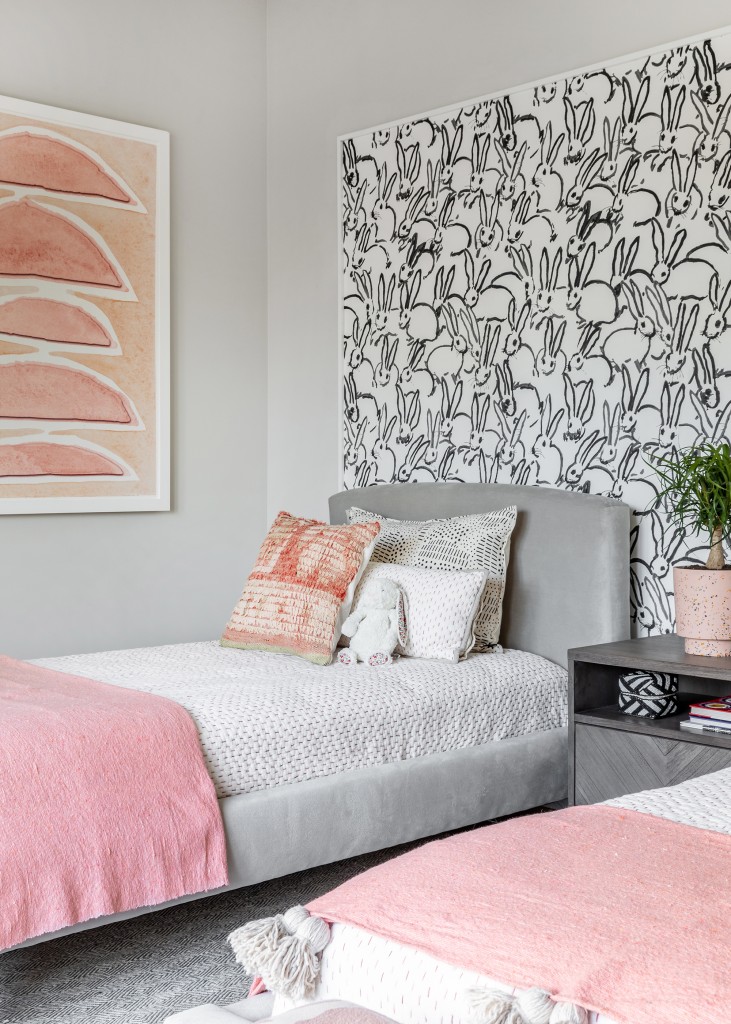 ROOM WE LOVE: A Polished Pantry

ROOM WE LOVE: In Living Color

ROOM WE LOVE: The Pink Side